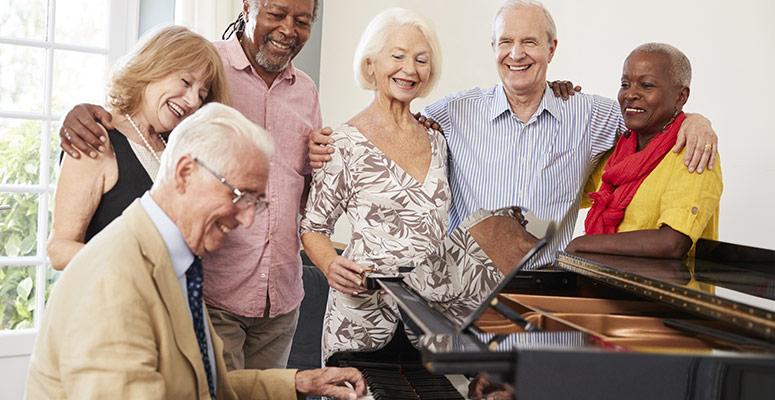 February 11, 2019 By Webmaster Posted in: Articles

The Benefits of Music for Seniors with Dementia

For seniors suffering with dementia, the gradual progression of the condition often leads to withdrawal and depression. However, a new study from the University of Helsinki have demonstrated the benefits of music for seniors which manage to improve not only the mood, but their memory capabilities as well.

Seniors who listen to music or sing on a regular basis demonstrate a significant improvement in their mood for numerous reasons. Of course, this depends on which stage of dementia has been reached, but the research demonstrates that in all but the final stages the effect of music is significant.

The research itself focused on 89 pairs of seniors who were divided into three groups. One group had no access to music or singing while the other two groups received 10 weeks of music coaching. One of the groups focused on singing and the other group focused on listening to music. After 9 months the effects of the singing and music listening were compared to the control group and the improvements noticed included the following:

The executive functioning is a term applied to the focus, planning, and memory stage when several tasks were being performed at the same time. It supervises the process for better organization. In all cases, there were improvements to many areas of brain activity thanks to listing or singing to music.

The study itself not only looked at seniors with different stages of dementia, but also their activities to see who might benefit the most from music. Perhaps not surprisingly, the study revealed that seniors under the age of 80 did better compared to those over the age of 80 when afflicted with similar levels of dementia.

Interestingly enough, whether the senior with dementia had a considerable music background or none at all, it appeared to make no difference. All seniors benefitted in some way from being exposed to music, whether they sang or simply listened. Some of the recommendations that come from the study include the following:

While listening to music was more effective for seniors who were in advanced stages of dementia, singing appeared to be quite effective for the early stages. This is because singing, especially in groups, was an engagement activity that helped maintain healthy memory function.

The benefits of music for seniors with dementia cannot be overlooked. This means that for those who take care of their loved ones who have dementia, regular intervals of music or singing will have a significant impact on their mood and their memory as well.